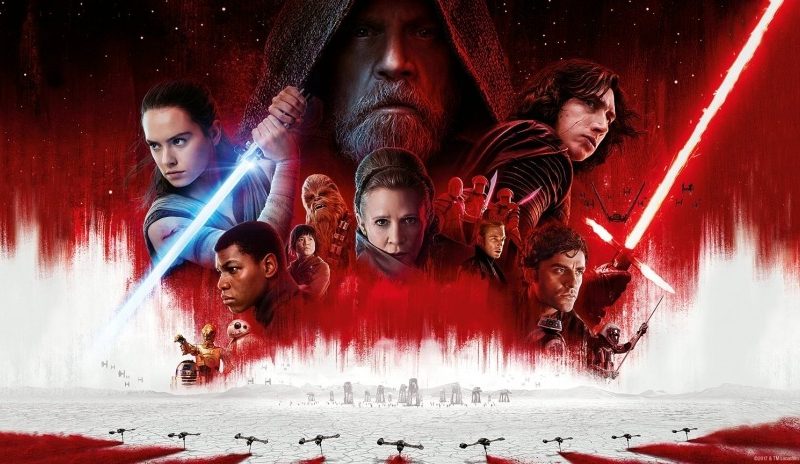 Join us in a galaxy far far away to have an early celebration of one of the geekiest days on the calendar (and one of our favourite!) As the immortal May the 4th is on the horizon we are inviting you to spend an evening with us a week early to celebrate all things STAR WARS as we screen the latest film in one of the biggest franchises in the world with STAR WARS: THE LAST JEDI.

“Luke Skywalker’s peaceful and solitary existence gets upended when he encounters Rey, a young woman who shows strong signs of the Force. Her desire to learn the ways of the Jedi forces Luke to make a decision that changes their lives forever. Meanwhile, Kylo Ren and General Hux lead the First Order in an all-out assault against Leia and the Resistance for supremacy of the galaxy…”

Get your seats early, grab a drink and a bite to eat and settle down to enjoy the film with fellow fans – cosplay and costumes are welcome at all of our events and often rewarded too! So bring your lightsabers, wear stormtrooper outfits and get into the spirit of things with the latest film in the Star Wars franchise.

We invite you to arrive from 7 pm as quiz picture round will be on the tables and question rounds will follow, then the film will screen from around 8 pm.

We all know that the start of a new calendar year sees all the fancy awards ceremonies and that summer is Blockbuster season for new releases. Are you aware of the importance of September in a film fan’s calendar though? A now international film festival occurs, which sees Nottingham’s film showing community come together for a month to put on some awesome events and this is the first year that we get to be a part of this iconic film festival – it is safe to say that we are excited!

So what is Scalarama ? Seven years ago a one-off film festival began in London, occupying a few bars and cafes who put up temporary screens and offered a cinema experience to audiences. It’s grown year on year, and now in its sixth year Nottingham sees many film clubs and societies band together and curate a programme that tries to show things a bit more unique. The primary intention of Scalarama is to ‘fill the land with cinemas’ and working with a pop-up cinema we certainly fulfil that requirement. It’s all about turning unexpected venues and spaces that wouldn’t typically be related to films into something different for a night or a series of screenings.

Now several years on Scalarama involves over 70 locations internationally and supports hundreds of film clubs in its pure intention of building cinemas across the land. Nottingham has played a significant part over the past few years and this year was no different as the city hosted some unique events and collaborations. It’s a selection of eclectic and exciting content, you’re likely to see films that you’ve never heard of, enjoy classics in new ways that you never thought possible and you are likely to make a bunch of new film obsessive friends to share your cinematic adventures with.

Take a look at the trailer below to see what was on offer this year, besides our own events we particularly loved the collaboration of Porlock Press and The Film Exchange’s interactive screening of The Running Man at Laser Quest and Fortune and Glory Film Club’s screening of Scott Pilgrim.

We personally delighted a bunch of true film fans who quoted The Princess Bride word for word, worked with a new venue and screened this year’s big Oscar winner La La Land at Welbeck Abbey and continued the musical vibe with a screening of the iconic and very special West Side Story at Blend – it was rather busy , if you have any suggestions for what you’d like to see next year, let us know!

One of the beauties of cinema is being able to bring people together, allowing fellow fans to quote along and enjoy the experience. So when multiple film groups, clubs, societies and cinemas come together to combine their film picking powers, it is nothing short of brilliant.

Something that we have learnt this season is that when watching films outdoors under the stars, these feelings of community are heightened with sing-a-longs and audience participation. We recently ended our summer season with Mamma Mia at Hodsock Priory and Rocky Horror Picture Show at Blend – and one of our favourite moments was the giant sing-a-long as the credits rolled, as everyone was just so happy and having a great time at both events. Film as a medium really does bring people together.

For us, cinema offers the chance to indulge in some escapism, and we hope that we provided that across September. We’re already looking forward to next year’s Scalarama programming. If you missed out this year, then take a look at the trailer to see what to expect in 2018 when Nottingham’s film community reunites once more.

By continuing to use the site, you agree to the use of cookies: Find out more.